Ok, ok, just wanted to make a point. When I moved to Bochum in Okt 1971, I could not speak German although I did pass a 4-year course in 3 years for high school in 1961 (Grade 13 finals in Grade 12). I had a radio and every morning I would listen to the news and be puzzled for several days
about the Wasserstände an schifffahrtsrelevanten Pegeln
Good for hearing numbers, although: Eins, Zwo, Drei Vier is confusing since one says 2 always
before three in counting, measuring. I assume one says zwo first to avoid the delay in misshearing
a three or drei later, after the mistake had been made? Clear as ink, so keep your ears stiff, my friend.

So where was I? Ah yes measuring the shipability on the Rio McGee.

On Thur May 4, I was able to measure the fiducial point - for me - under the bridge where I had
placed a large rock to help me find the place for later sessions. The water depth was 57cm. I also
measured the depth downstream on the north side of the bridge for the case when the water was too deep, current too strong, water too cold, etc. It looked like this: 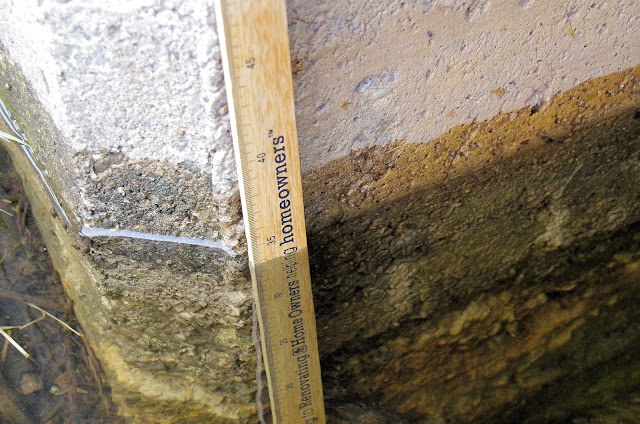 33.85cm (between .8 and .9 and an idea of the uncertainty if it matters - it does since it is a measurement) The ruler is against the underside of the bridge and is vertical even if it does not look like it. Another source of measuring error.

It began to rain. Noah came by and suggested getting in touch with Moses for Saturday. Moses told me that his "magic" rod was in the British Museum but was told that the one from Home Hardware  would do just as well. The entry looked like this: 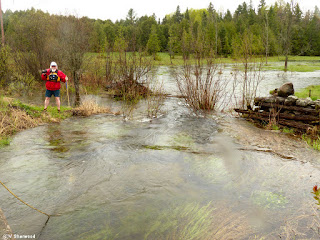 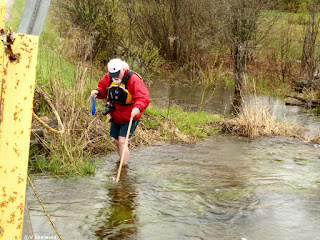 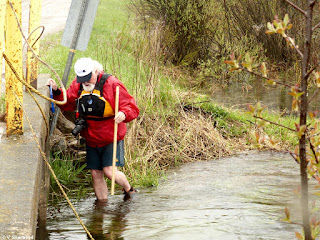 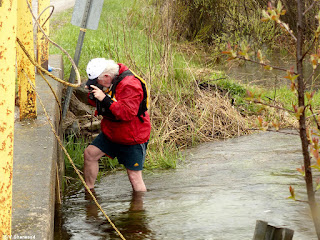 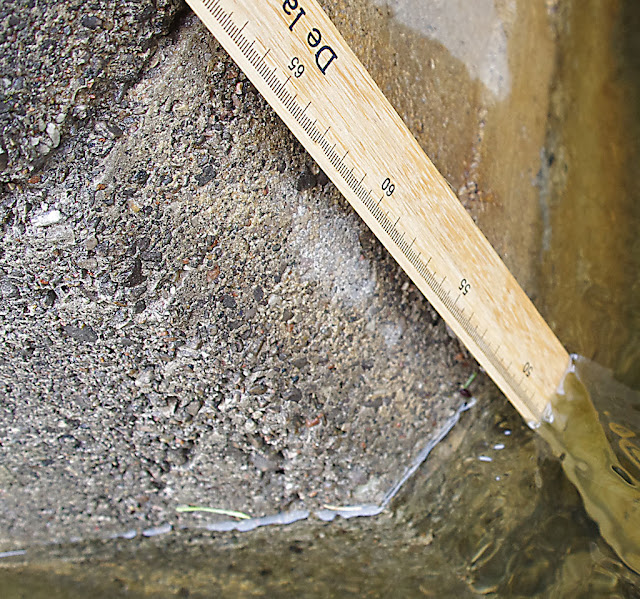 The depth is 48 cm and I am not vertical but the ruler is! The fiducial depth is implied to be 71cm +/-

Yesterday, Monday, May 8, I returned to the scene and recorded this: 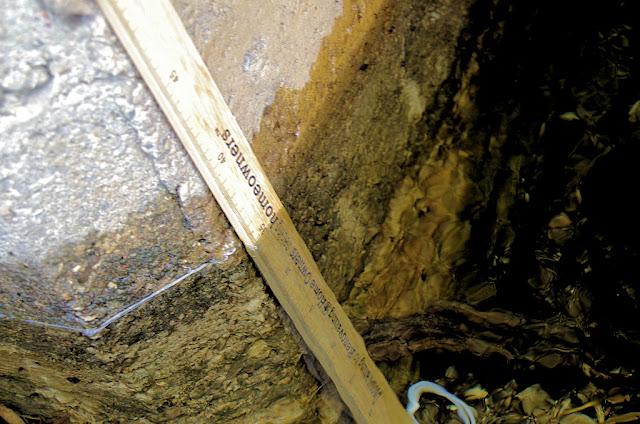 34.9cm or 58cm at the rock under the bridge. I felt I could have made it, but the water was 8C and I did not want to risk hurting anybody involved with the water programme. So there!

How is your day?

Still, we made it.

Ever wonder at the mundane events in the life of a water tester?

I saw this bird and could not believe it. And it was quite windy as well. 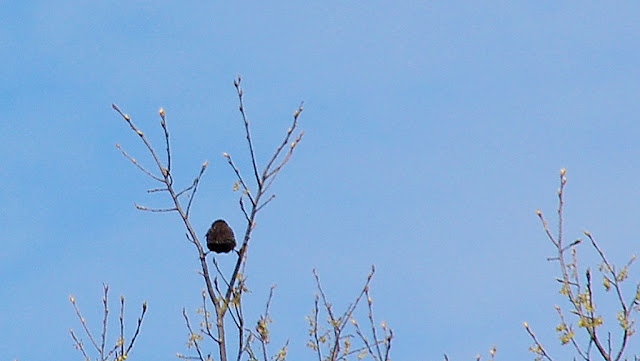 Can you imagine landing on two different runways? The indecision of choosing the branch less trodden, the one less traveled by


And Vicki and I work in quite an isolated rural setting - everywhere we see abandoned barns.

Did I say abandoned? Well not quite. But middle-age sag? Too many TV dinners, if you understand me: 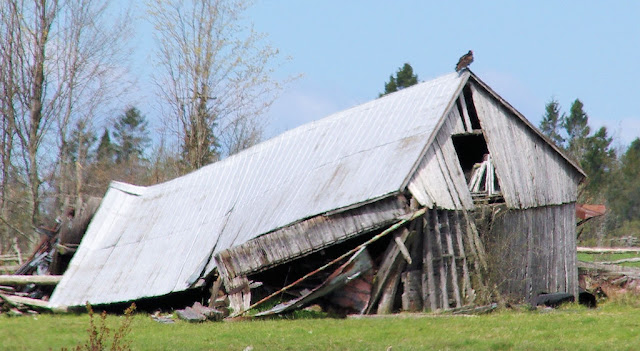 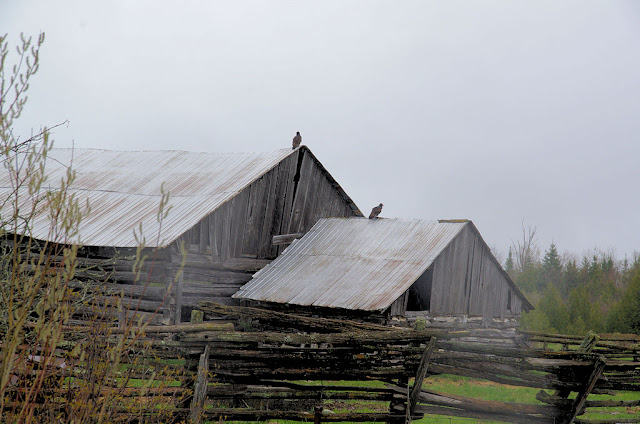 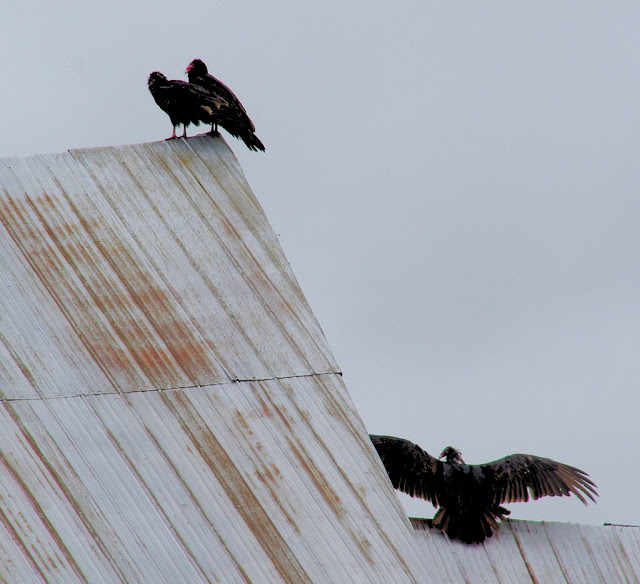 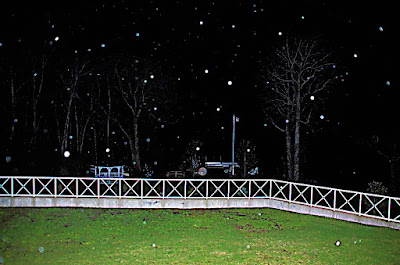 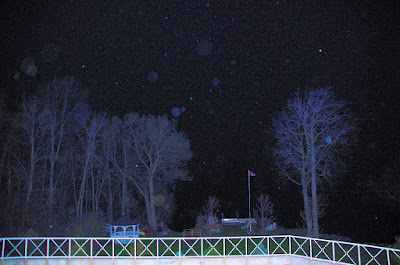 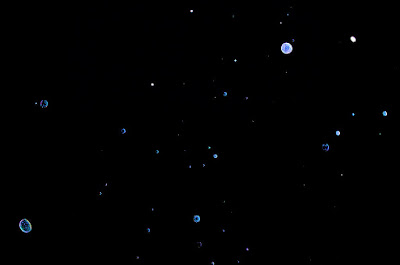 Prayers said - have we seen the last snowfall before June 21?